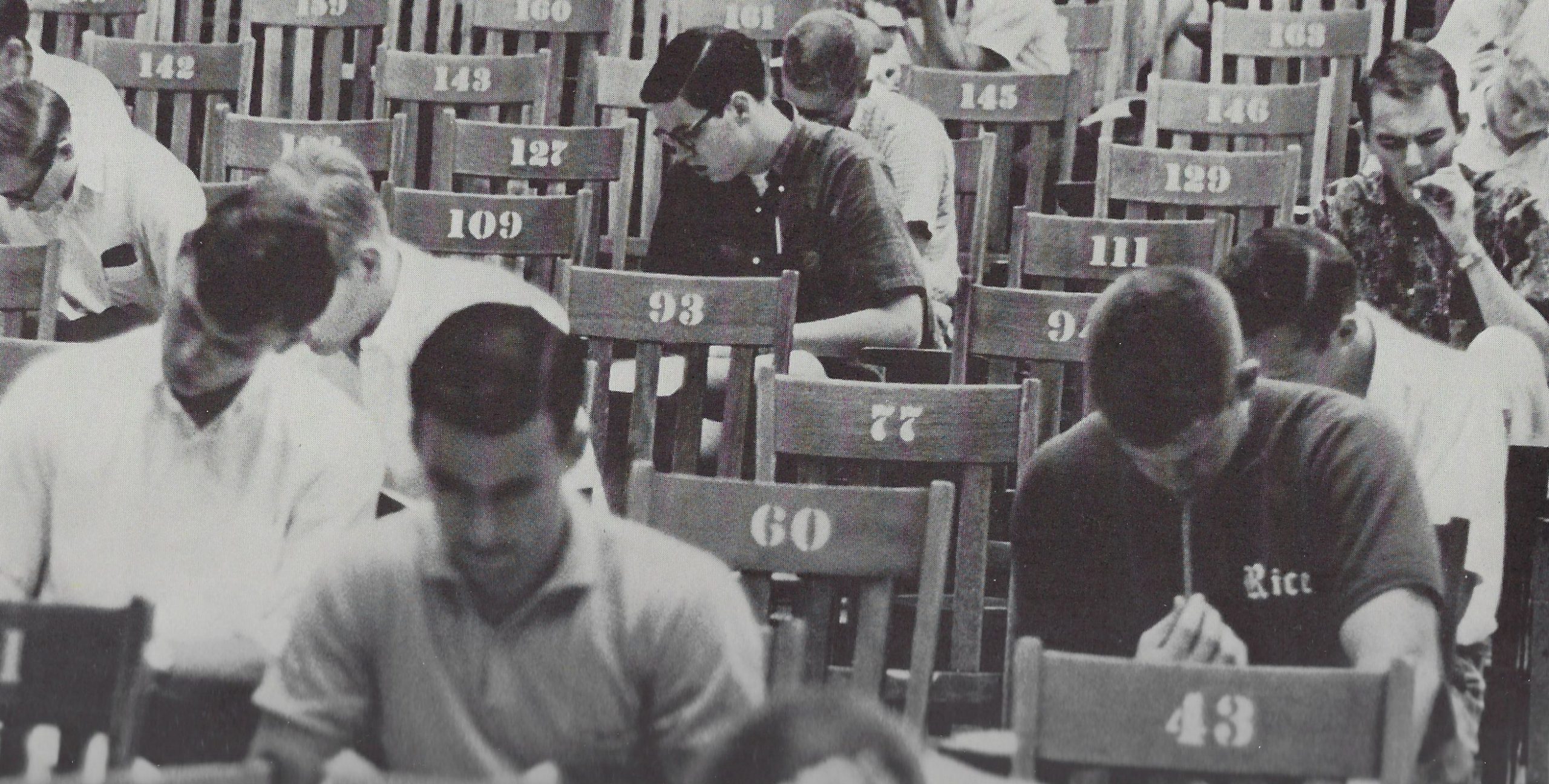 But the saga of Math 100, described in the previous entry, was not over.  There was a final piece of the story to be revealed.  At my fiftieth high school reunion I had a conversation with Chris, who had been one of my closest friends in high school and in college.  Our reminiscences of our time at Rice drifted back to the horrors of the calculus course, and Chris’s memories paralleled my own.  But, then my mouth fell open, as he began to say that at the end of the second semester, he had been called into Professor Brown’s office and offered a “D” in exchange for a promise to never take another math course.  I was still in shock from having heard that someone else owned my story, when Chris immediately recognized the implications of our experiences.  These were not isolated events that just happened to occur to both of us; they were part of the very structure of the course, itself. If we failed, those who taught the course would have to deal with us again.  If we passed in the normal fashion, we might take another math course.  But the threat of the “F,” accompanied by the promise to never return, assured that we would be banished from the world of mathematics and would never bother them again.

As I have pondered this story over the last several years, it has become my key to placing the world of teaching and learning in higher education in a larger historical context.  If what happened to Chris and I was part of a regular pattern of behavior that was enacted semester after semester, it is evidence of a striking lack of sensitivity to the plight of the students caught in this little ruse. Neither of us needed calculus to continue on our path through life. But, if we had, our entire future would have been jeopardized. And had we not been white males*, from families committed to higher education, and if our humiliation been reinforced by messages from the broader society that our failure was the natural result of our class, race, or gender, we might have found it much more difficult to ever recover our footing.  Moreover, at that point in history Rice was still tuition-free, and I neither had to work to pay for my education nor to worry about student loans piling up. Finally, this all occurred in an era in which the 4.0 was not yet the requirement for social mobility, and I was judged at later stages of my career by a world that was more forgiving of early difficulties than the one in which we live today.

I seriously doubt that the personal or collective consequences of this system, which seem so obvious to me now, would ever have occurred to those who created and perpetuated it.  They came to consciousness in a world in which the memory of an older academia was still dominant, one in which one of the main functions of institutions of higher education was to keep “inferior” students from entering or continuing.  Society had had no great need for large numbers of college graduates, and a degree was a very special gift, only to be granted to the best and brightest.

In 1962 that world was already beginning to disappear, even in elite institutions like Rice.  Now it has disappeared  almost completely, as college graduation has become the necessary portal to a decent life for the individual and an absolute necessity for the health of our economic and our democracy.  But academia is quite conservative, and it gives up illusions with glacial slowness.  So, despite the personal values of most of the individuals who teach within the system, institutions of higher education remain part of the machinery that generates inequality in our society, as many instructors still seek to purge all but the “best and brightest” from their courses.

Every student can certainly not succeed in every course, and “dumbing-down” does not serve the real interests of our students or our society.  But we have a responsibility to help as many students as possible to achieve their full potential. Whatever capacity I might have had to learn at least some math was crushed because of an antiquated elitism, in which instructors were allowed to destroy their students’ future in a quest for eliminating from their classrooms anyone who might actually need to be taught.  And the attitudes of 1962 are still alive in academia. They continue to condemn students, who might otherwise thrive, to shame and failure.

* For the record in the 1962-1963 school year Rice University, then in its 51st years of existence, was only beginning the legal process of breaking the stipulations in William Marsh Rice’s will that prohibited African-Americans from admittance to the institution as undergraduates.