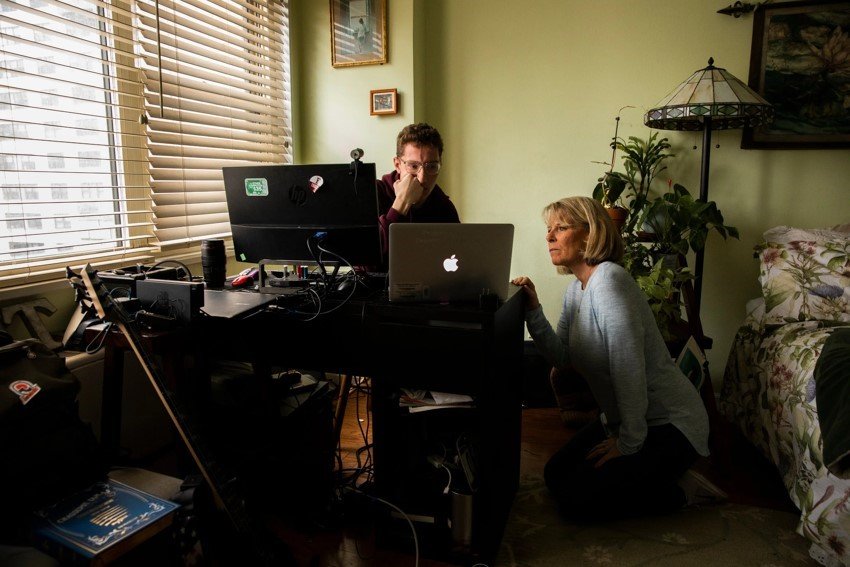 It is a lovely image, a beautiful example of the high quality of contemporary newspaper photography. The composition is perfect. The diagonal slats of the blinds carry the viewers’ eyes back to faces illuminated by light from hidden computer screens. The entire scene has the quiet intensity of a painting by Caravaggio.

But this image of calm resolve in the face of the current educational crisis, like The New York Times article that accompanies it, distorts the reality of the challenge that we face. As anyone who has been following the current situation must realize, from kindergarten to college a large portion of the current student population is trying to cope with online learning under much less propitious circumstances than those presented in this photograph. To capture their experience, we must remove from the picture the attentive mother, who has no more pressing duty than to support the educational progress of her child. And we must replace the two computers in the photo with an ill-functioning tablet or smart phone, and the quiet surroundings with constant distractions and siblings demanding their time on the family’s only link to the outside world. But even this chaotic environment does not capture the full burden that many must bear, because there are neighborhoods fifty miles from where I am writing in which 50% to 75% of those under eighteen lack computers or internet access altogether.

The accompanying article generally ignores such differences by focusing attention on generic strategies for distance education. But the differences in access to the means of learning production find their way into the piece indirectly. The author refers to a study of virtual education in Michigan during the 2018-2019 school year that noted a pass rate of 50% of students living below the poverty rate and 70% for those who came from more financially secure families. This disparity is dismissed with the observation that it roughly parallels the failure rate in traditional public high schools. But there is every reason to imagine that the already disturbing pre-pandemic difference in  educational opportunity is being magnified by current conditions and that the learning that is being lost will have disastrous effects for the future of the disadvantaged students and of the society as a whole.

Moreover, the very steps that the article recommends for making the best of this unplanned transition to online education assume resources that are (especially in the United States) distributed very unequally among schools. It notes that if students “have a facilitator or mentor on hand, to help with the technology and focus their attention – an approach sometimes called blended learning – they perform about as well in many virtual classes, sometimes better.”* But schools that struggle to provide even the meagerest of education to their students under the best of circumstances are completely unable to extend such assistance in the midst of a crisis.

In education, as in so many other aspects of society, the pandemic is ripping away illusions of an equal and just society in which success in based primarily on individual effort and merit. The inequality of K-12 education in our societies has, of course, never been invisible to those working in higher education. The efforts of many college teachers to assure that their own children receive every advantage rests upon an awareness that equal educational opportunity is not available to all, and the general leftist political orientation of most faculty made them very conscious of the ways in which issues of class, race, and culture can deprive many students of the chance for real learning.

Yet, when it came time to deal with their own classes, many of these same college teachers conveniently forgot the inequities of the pedagogical universe that their students had inhabited before they arrived in college. They praised high performing students and gave them support, while dismissing their less successful classmates as unworthy of their attention. If pressed, these professors insisted that they could not compromise the high standards of their profession, without ever considering whether the injustice of the broader educational system morally required them to explore ways to teach that would allow more students to reach these goals.

The Watergate era popularized a marvelous bit of legal terminology – the “unindicted co-conspirator” – to describe individuals who have been involved in a crime, but have not, for various reasons, been charged. This term captures most effectively the role that academia has played in the broader inequality that robs our society of so much potential. By perpetuating pedagogical strategies that only reach pre-educated students, college teachers have made themselves accomplices in the theft of educational resources from millions of students. But they have not be held liable for the damage created by such behavior.

The pandemic makes such deniability more tenuous. It will be increasingly obvious that the learning of some students has been relatively untouched by the COVID crisis because of the quality of their schools and the support of their families, while others will have been abandoned by a system that does not honor their right to an education. Unless we increase our ability to help such students catch up, once they arrive in college, we will be part of one of the greatest redistribution of income, opportunity, and status in history. And we will be struggling to maintain the increasingly vacuous lie that the warm and reassuring photograph above represents the reality of all our future students.