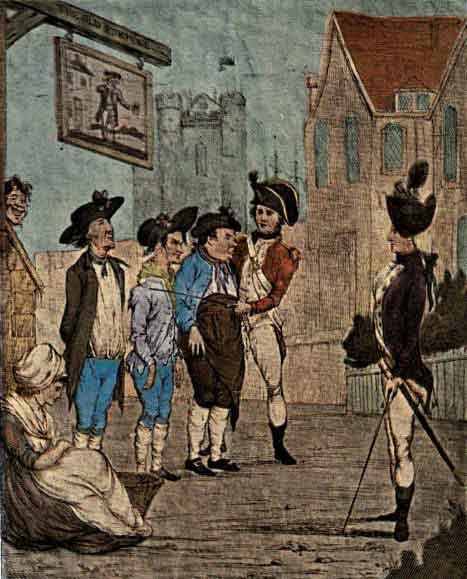 Several decades ago, when the writings of Michel Foucault were at the peak of their popularity in academia, my former colleague, Jim Riley, remarked insightfully that what was most enlightening in the work of the French philosopher/historian was not his soaring theories, but rather the powerful examples that he set before the reader to demonstrate his conjectures. None of Foucault’s examples ever enlightened me more than his contrast of two different strategies for creating an army.  Early in Discipline and Punish, he shares a passage from the 17th century describing the ideal soldier: “The signs for recognizing those most suited to this profession are a lively, alert manner, an erect head, a taut stomach, broad shoulders, long arms, strong fingers, a small belly, thick thighs, slender legs and dry feet, because a man of such a figure could not fail to be agile and strong.” The task of the military hierarchy in this era consisted of scouring the population to identify enough men who fit this general description.

However, by the late 18th century, Foucault argued, “the solider became something that could be made; out of a formless clay, an inapt body, the machine required could be constructed; posture is gradually corrected; a calculated constraint runs slowly through each part of the body, mastering it, making it pliable, ready at all times, turning silently into the automatism of habit; in short, one has ‘got rid of the peasant’ and given him ‘the air of a soldier’.”[1]

Foucault uses this contrast as a building block for his argument that by the 19th century Western culture had set out on a mission to control individual behavior by systematically remolding the human body. But the contrast can also be used to compare two very different attitudes to education that persist in universities today. An older tradition views students very much as the 17th century military strategist evaluated potential recruits.  The point in both cases was to identify those few individuals who were particularly suited to the tasks at hand and to develop this potential to the greatest extent possible. In the context of the contemporary university such an approach works reasonably well at producing a small number of super stars in each discipline and in various professions. But it is fundamentally anti-democratic, because it ignores the economic, cultural, and political forces that cultivated the desired qualities in some students before they arrive in college and denies these benefits to others. And this approach is totally inappropriate in a society that needs to educate great masses of students for their roles as citizens and as workers.

By contrast, the intense work that has gone into the exploration of teaching and learning over the last several decades rests on assumptions that are much more like those of Foucault’s modern military planners. Here the strategy is not to identify the population that has been bred for success, but rather to alter the behavior and the ways of thinking of large numbers of students to help them find success and fulfillment in social realms from which they would otherwise be barred. This approach obviously requires a great deal more ingenuity and flexibility, and it must always confront the possibility that we lack tools of sufficient strength to bring about the desired change in some students. But it does respond to the reality of higher education outside the most elite institutions, and it represents a deep commitment to the deepening of democracy and to serving the broader interests of society.

The analogy to Foucault, however, raises questions that we have a moral obligation to confront. As he makes excruciatingly painful in the rest of Discipline and Punish, the goal of molding a peasant into the perfect fighting machine had nothing to do with offering the soldier an opportunity for self-realization or even access to a high station in life. This process, like the parallel efforts to mold obedient workers, repentant criminals, and compliant citizens, was fundamentally about the scrutiny and manipulation of individuals’ minds and bodies for the political and economic interests of those in control of society.  Like Jeremy Bentham, whose model prison, the Panopticon, was the ultimate surveillance institution, many of those who instituted these new forms of social rationalization were seeking to bring about needed reforms. But in retrospect we can only feel horror at their obsession with remolding individual character to match social ideals.

If history, in general, and Foucault, in particular, teach us anything, it is that individuals can often be deluded about the moral nature of their efforts. If we stop for a moment and distance ourselves at least a little from the historical moment that makes our own choices seem so compelling, we must consider the possibility that our own efforts to make our courses a more rational site for learning might be as coercive as those of Bentham.

To educate is inevitably to change, and we must accept that responsibility.  But we are also morally obliged to question the behavioral norms that we trying to instill in our students and to consider the social roles that we are preparing them for. The larger social and economic system that we inhabit is more than happy to use us to mold our students into compliant tools for grand projects that have nothing to do with their real interests. Is it possible that the effort to reshape marginalized students into successful consumers of knowledge serves interests that we do not want to acknowledge?

No approach to teaching and learning is more obviously a target for such moral questioning than Decoding the Disciplines. From its origins it has sought to break down the steps necessary for success in a discipline and to install these in our students.

There is nothing in that effort that is necessarily objectionable. Since the mastery of these skills is a requirement in college, we are opening the path to success for more students. But the very presence of the word “disciplines” in the title of the approach should serve as a reminder that we are also striving to shape the actions and, perhaps, the character of our students. To some extent, this is an unavoidable consequence of education. But we do need to stop from time to time to consider the processes that have been normalized by our disciplines and the uses to which these skills will be put after graduation. And there may be moments when we realize that it is time to stop shaping soldiers and to begin questioning war.