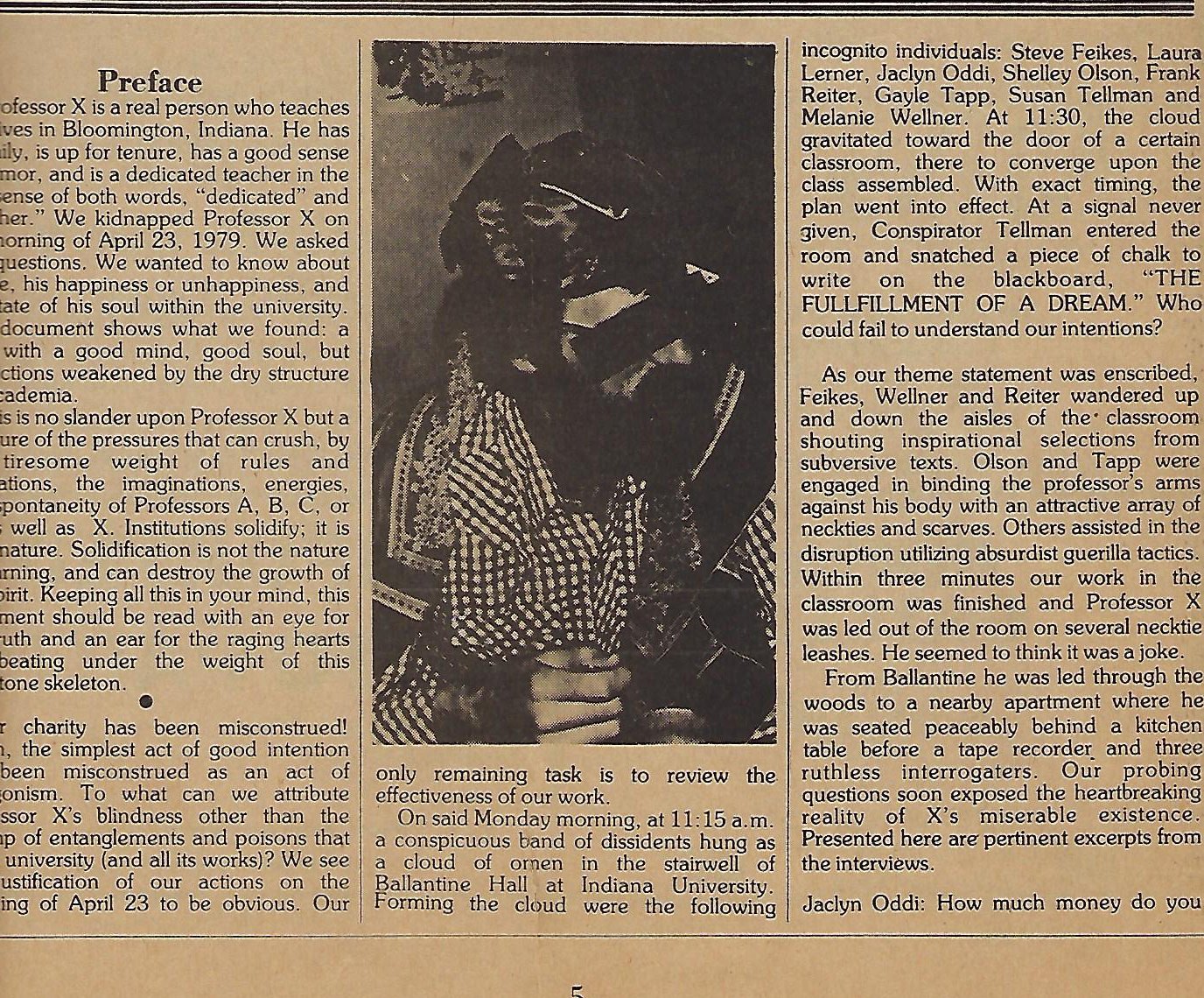 Never was the tension between teaching and tenure so visible to me as in those moments, locked in an undergraduate apartment, as the reels of the tape recorder turned, and students bombarded me with potentially incriminating questions.  The decision on my tenure was just a few months away.  My first child was due in weeks, and I still had not received word as to whether my book was accepted for publication. Of greatest concern at the moment, however, was the fact that I did not know what was going to happen to the material on that tape.  But at least my teaching methods seemed to be working.

In the spring of 1979 I was nearing the end of my eighth year as a faculty member, and I was just breaking free of the pedagogical fetters that bound me to the teaching strategies that I, myself, had experienced in my own undergraduate classes.  Then in its fourth iteration my course on the cultural history of Paris and Berlin in the 1920s was growing, and I was looking for ways to maintain the intensity of small-group discussions with a larger group of students.  Moreover, the very nature of the material called for more radical and spontaneous forms of interaction.

Therefore, I took what was for me at the time a radical step.  I broke the class up into groups and required each to make some kind of presentation to the rest of the class.  Since I was new to this kind of teaching, the assignment was unclear and ill-conceived, and, predictably, most of the productions were rather mediocre. But one group of students was so excited by Dada that they discovered a play by Tristan Tzara and did an excellent reading for their classmates.  At the end of the performance I congratulated them on their work and was prepared to give the group an A for this part of the course.  But they insisted that they were not finished and indicated that they were planning something else for later in the semester.

Weeks passed, and I had completely forgotten about this promise/threat, when the Dada team and a group of their friends burst into my class one morning in the midst of a lecture. Chanting meaningless slogans and waving streamers made from knotted neck ties, they passed out a sheet entitled “Save a Professor’s Mind” that perfectly captured early 20th century Dada sensibilities.  As I was laughing at the spectacle, two of the students positioned themselves behind me, threw a band of ties over my head and pinned my arms to my sides.  Before I could act, I found myself completely under their control and unable to prevent the neo-Dadaists from dragging me out of the classroom and marching me, still bound, across campus to a nearby student apartment.

When I was securely locked within one of the rooms, I was untied, set at a table, and photographed.  A tape recorder was activated, and the students began to ask me a series of questions of the “when-did-you-stop-beating-your-wife,” variety, many of which I could not answer without in some way incriminating myself.  Everything about their actions perfectly captured the spirit of the Dada movement that we had been studying earlier in the semester. Part of me was very pleased that the students had so thoroughly grasped the mentality of a historical movement.  But another part of me was concerned about exactly how all of this was going to play out.  I had another class that afternoon, and the students showed no sign of intending to set me free in the immediate future.  In fact, they served me matzo ball soup and seemed to be settling in for an afternoon of Dada play.

More seriously, I had no idea what was going to happen to the recording.  Normally, this would not have been such a serious concern, but at the moment I was intensively worried about all of this might look to my tenure committee and to many other very conservative senior faculty, who would soon be deciding my fate.  I answered the questions with a little less zest than I might have shown under other circumstances, trying, with spectacular lack of success, to minimize the elements of self-incrimination built into some of the questions.  After a good deal of time had passed, my captors allowed me a break, and, seeing a chance to escape, I leapt through an open window – luckily I was on the ground floor – and fled.

As the semester ended and summer began, the event increasingly assumed the role of an amusing anecdote, and I thought I was safe.  But, then, just as the tenure process was beginning, the Ryder, my city’s excellent literary review, published “The Fulfillment of a Dream or the Abduction of Professor X,”   a description of my kidnapping with excerpts from the interview appeared in the article, along with a photograph, in which the line across my eyes did little more than imply criminality.

I, of course, panicked, but my fears turned out to be groundless.  No one who would have been scandalized by the events would have ever deigned to read the Ryder, and colleagues who did read the magazine had the good manners to not mention it to the arch conservatives who were deciding my fate.

Had my more reactionary “colleagues” become aware of the incident, I am sure that it would have confirmed, not only their suspicions about me, but also their conviction that surrendering absolute control over the space of the classroom would inevitably result in unproductive chaos.  But, I had no regrets about the consequences of abandoning the “sage-on-stage” role and making a space for all of this spontaneity, energy, and excitement to burst forth.

Some of the most gratifying moments in my long teaching career have been the few occasions when students became so excited about the subject of a discussion that they spontaneously seized the chalk and without asking began to add their own words to those already on the board, heedless of the artificial hierarchy we create between teacher and student. My abductors seized the “chalk” in a much more dramatic way, and in the process they took control over their own education.  They taught me and their more passive classmates a valuable lesson, not only about the cultural history of the early 20th century, but also about nature of human freedom and creativity.  I remain thankful to Steve Feikes, Melanie Wellner, Jaclyn Oddi, and all their co-conspirators for reversing our roles and teaching their teacher.

Special thanks to my friend, Peter Lopilato, the founder and still editor of The Ryder, for allowing me to use the original article from  the July 13-27, 1999 issue of the magazine.