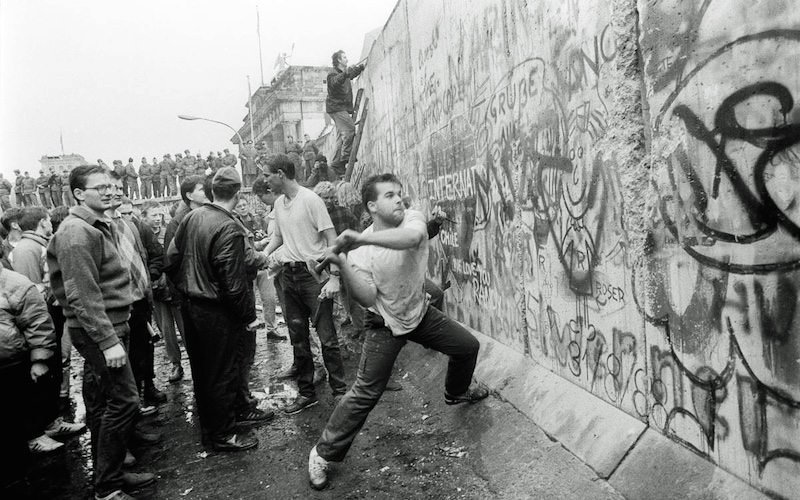 We can be as divided by invisible walls as by those made of stone.  They limit our movements and deny us access to all that lies on the other side of the unseen barrier. Those on our side come to constitute humanity; those on the other are something else, vague creatures who serve as screens for the projection of our anxieties.  We remain diminished by what we never see and unaware that the solution to some of our most pressing problems may be near at hand, and yet impossibly distant.

Such a wall cuts through the middle of the educational system of the United States, and, I believe, of that of many other nations.  Two systems for training future citizens began quite independently, one to introduce a steadily increasing mass of children and adolescents to the rudiments of knowledge needed in the daily world, the other to provide specialized training to a tiny group of clergy and later professionals.  These two great systems of education went through enormous changes, but they remained quite separate.

This history of instructional division isolates the two populations of educators from one another.  Occasionally, high school teachers go on for a Ph.D. and move into university education, but the knowledge of that other world that they bring with them is rarely shared with colleagues, whose only knowledge of the K-12 classroom* comes from their own, increasingly irrelevant, memories.

This institutional division is often made worse, particularly at research institutions, when university faculty project their own insecurities onto their counterparts in the earlier stages of the educational system. College teachers, who are struggling frantically to protect their positions within the status gradations of their own institutions, can at least derive some solace from the belief that they are part of a system that is “higher.”  Even the most politically radical professors are apt to set aside considerations of social classes and inequality, when they weigh their own importance and values in comparison with those who teach in the “lower” grades.  On some campus even schools of education are treated as if they are of a lower status because of their link to those beneath them in their imagined social hierarchy, and a possible trading zone, in which ideas might pass back and forth between the two realms of teaching, is lost.

This is obviously dysfunctional.  As has often been pointed out, students do not go through some magical transformation in the summer before they begin college.  They have the same learning problems on both sides of the great divide, and their teachers face the same challenges.  But information flow across the systems is inhibited by the lack of personal contact between practitioners in the two halves of the educational system.

It is students who suffer from this failure to communicate, particularly those who are marginal within the class system, but who hope to go to college. Bereft of up-to-date information about what is being expected in current college classes, their high school teachers often have to imagine the learning needs that their charges will face, and they sometimes aim at wrong target.  In my own field, for example, many high school history courses prepare students by emphasizing the retention of dates and facts, whereas those who will be grading their work in introductory college history courses are generally much more concerned about historical reasoning.  And on the other side of the great divide college faculty generally lack clear understanding of what their students have learned and have experienced before they arrived at the gates of academia.

Even the most naïve outside observer of education systems should recognize that there is a continuum from the beginnings of formal education through the most advanced post-graduate training. Yet, to shift the metaphor for a moment, educators in high schools and colleges exist as if on continents that were separated by a vast ocean in some long- forgotten tectonic shift.

It is important to stress that this dysfunctional situation is not the result of individual moral failings.  We all exist within a cultural geography that draws our footsteps naturally back towards the familiar and away from the lands that lie on the other side of the invisible wall.  Despite my occasional protests, I, myself, have remained within the territory of my tribe since I left high school.  I have not sought contact with K-12 teachers, and virtually all of my work in the scholarship of teaching and learning has been focused on college instruction.  Decoding the Disciplines began with a focus on university education, and I have done virtually nothing to make the approach more available to elementary and high school teachers.

But cultural geography is not destiny, and there are already adventurous souls who have begun to open a dialogue about Decoding across the cultural barrier. Courses training future K-12 students provided a natural locale for the initial contact. Kyle T. Schultz and LouAnn Lovin have used the approach to make explicit the processes that they, themselves, would use to prepare lesson plans in math and then have explicitly taught those steps to their students.1 Sarah Drake Brown at Ball State University and Arlene Díaz and Leah Shopkow at Indiana University Bloomington have done great work in making Decoding a central element in courses that prepare future high school history teachers, using the paradigm to give them a clearer idea of the kinds of mental operations that they will need to understand before they can effectively introduce  their own students to the discipline.2

Hopefully, this work will spread, and Decoding will become a part of teacher training in other disciplines.  But this will take a long time and will be of relatively little use to those currently teaching from kindergarten through high school.  It is, however, possible to imagine repurposing Decoding to make it serve as a bridge across the great educational divide.  As in any effort to reach across a cultural divide, it is crucial to begin by developing a shared language that allows both groups to work together on common problems.  The great work being done at Mount Royal University,3 in particular, has demonstrated that the decoding interview  is a powerful tool for establishing such a common language and launching a powerful conversation about classroom challenges.

This process could used to connect K-12 and college teachers.  Small groups of instructors teaching the same subject in each system could come together to work to create a smoother transition into college courses.  After a brief introduction to Decoding, one of the university instructors could describe some of the typical bottlenecks to learning that students encounter in an introductory course in the field.  The group, as a whole, could then collectively interview that faculty member to make explicit the mental operations that students must master to overcome these obstacles.  There could be brainstorming sessions in which the entire group worked to imagine ways that these skills could be modeled, practiced, and assessed on both sides of K-12/college boundary.  Finally, what was learned could be shared in blogs, podcasts, or articles.

This use of Decoding to tear down the wall that exists at the heart of K-16* education would have multiple important outcomes.  The university instructors would have had the experience of having their own practice decoded and, thus, would be in a position to draw more of their students fully into the learning process.  The high school teachers would have a clearer target to aim at in preparing students for the transition to college.  They would have a better idea of what they needed to focus on in their classes and what could be left to the students to figure out for themselves.  This would, in turn, ease the burden of the university faculty, who would now be teach students who were better prepared to do college level work.

Moreover, a dialogue between the two groups of teachers would have been inaugurated.  They would have gone through a common experience of defining goals and would have a much better understanding of the challenges faced by their counterparts on the other sides of the great educational divide.  They would be contributing to an ever expanding body of knowledge about best practices in all levels of education. And a community would have been generated in which the two groups could come together in a shared effort to help more students succeed.

* I think that the K-12 abbreviation has come into common use internationally, but, just to be sure, I will note that the term represents the entire system of education from kindergarten to graduation from higher school. By extension K-16 has begun to be used to refer to extend the term to include college.